How you can do your own graphic design for social media and more — with easy to use tools. 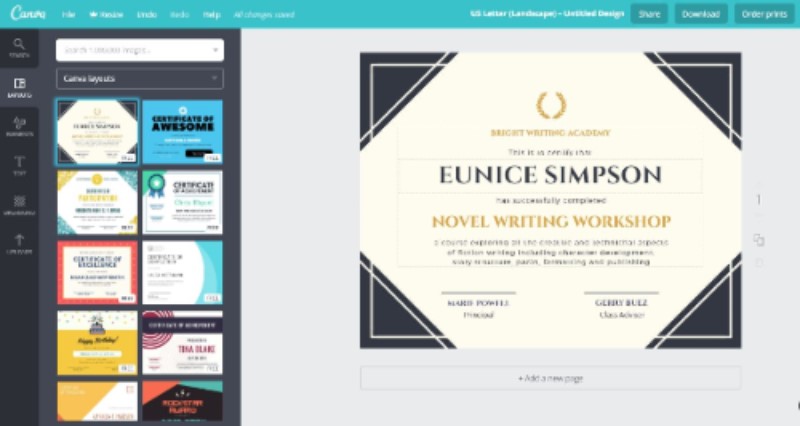 Face it!  Your social media and other public-facing business communications probably don't look as good as they should, and that is hurting your brand perception and sales.  The four tools described in this article will help your business put forward a much more professional image and inspire confidence among your customers.  From images to video, these tools are starting points that can help offset the burden of graphic design and video production and bring higher engagements to your communications, marketing, and advertising strategies.

Canva is the current mobile app darling.  Founded by the young Australian serial entrepreneur Melanie Perkins, it has raised tens-of-millions of dollars in venture funding and has a valuation of over one-billion dollars.

Canva basically turns graphic design into a service with an easy-to-get-hooked freemium monetization model.  Create social headings and posts, book covers, infographics, posters, album cover art, and practically anything else you want.  Features tens of thousands of pre-designed pieces of creative that are fully customizable.  Want a different font?  Got it.  Need a different background?  Cool!

Canva is free to start with additional assets available through micro-purchases. Roughly $13 per seat when you turn into a business subscriber to gain access to savable color palettes, additional image storage, team access, and custom fonts.  Canva is available on Android, iOS, and the web.  Mobile versions support phone and tablet.

Desygner is another design-as-a-service tool from the Land Down Under (Australia) .  Desygner came three years after Canva, and could be argued to be a bit of a copy-cat, but we're not 100% sure of the history,

so we'll leave all of those claims to speculation.  What is most unique about Desygner is a clear focus on business-oriented creative assets like business cards, invoices, and email newsletters.  Sure, you can accomplish these tasks in Canva, but in Desygner, they're front-and-center.

Desygner is free to about the same extent as any of its competition.  Desygner has a serious price advantage as the cost to upgrade for additional photos, templates, and custom fonts is only $6.95 per month.  A business version is also available for $19.95 per month which comes with the ability for design shops, consultants, and others to white-label the Desygner service on a custom domain... and we think that's really cool!  The white label service—through Desygner owned WeBrand.com—is also useful for creating an online media asset room or press resource, if you have the money to spend on that sort of thing.  Get Desygner on Android, iOS, or the web.

Before we move onto something other than graphic design tools, I'm going to include one more (and secretly slip in a few more afterwords):

Fotor makes this list because they're more accurately listed as a photo editing and collage tool than as design-as-a-service.  Sure, the have evolved into the status as a design tool with pre-made design templates, but the different origin sets a unique feature set.  There used to be hundreds of similar photo apps across the web and mobile app landscape, but those that are staying relevant with continual updates are following in the footsteps of Canva, Desygner, and others.

Fotor is a nice lower cost tool to address photo editing and design-as-a-service at only $40 per year ($3.33 per month), or you can pay month to month for the higher cost of $8.99 per month.

Fotor is available on the web, Android, iOS, and Windows.  The Windows application has a slightly different toolset than the other access points, but it includes some powerful features such as batch processing.

Because there are literally dozens of graphic design-as-a-service tools to include, I'm going to stop after describing Canva, Desygner, and Fotor.  If you're favorite isn't listed here, maybe it's one of these runners up for attention: DesignBold, Pixlr, PicMonkey, or Adobe Spark. If your favorite still hasn't been represented, let us know in the comments below.

Moving on from graphic design, we could ask what happens when you need shortform videos primarily featuring photos and animated text?  Maybe you labor in a pro-sumer video editor and deal with text and title layers, how can you create at a more rapid pace to fill your social media needs?

Ripl comes to the rescue as an iOS or Android app for creating eye-catching video for use in social and other online promotions.

Like most tools discussed, Ripl is free to start using but costs $9.99 for the pro version.  The pro version includes additional font choices, more music tracks, post scheduling, and the ability to add your logo as an overlay on any of the animated text videos.

Legend, much like Ripl, assists with creating animated text videos.  While not as feature rich as Ripl, is completely free as of the time of writing this post.  The app, created by a concern called Stupeflix, began as an iOS app and later moved to Android.  There doesn't seem to be much initiative to update this application or to add features, or even to monetize.  The animations are all pre-configured and the results become very predictable extremely quickly.  However, it's hard to argue with a completely free tool.

Since Legend was designed primarily to make animated text videos to share with friends through messenger software (SnapChat, Facebook Messenger, etc.) it doesn't include music, but there are plenty of lightweight video editing apps in any app store that can help alleviate this issue if it is a concern.

Piktochart is a tried-and-true favorite for those who need to make infographics.  The service also enables the creation of presentations, reports, flyers, and posters and has been a go-to for online creators--especially educators--for a number of years.  If you're not in education or a non-profit organization, however, there are three monthly rate tiers: 12.50, 24.17, or starting at 82.50 for enterprises.  The difference between the to lower-cost plans are quite numerous, however, so be sure to check out the Piktochart pricing page to compare.  Unless you're making a large volume of reports and presentations, however, I'd still suggest going with Canva or Desygner (or something similar) as they offer infographics and flyers that are at least on-par with Piktochart.  The largest concern that I have about Piktochart is that the $12.50 per month plan does not remove Piktochart's watermark from the assets created with the tool.

This nifty little tool is available on Android, iOS, and WIndows from a company called Magix which is better known for its VEGAS Pro video editing software, Sound Forge audio software, and Xara line of graphics and photo editors.   Personally, I used Music Maker Jam to create custom music to accompany my animated text videos as the text animation tools listed above either omit music or have a limited number and style of tracks.

Music Maker was originally desktop software for easily creating music with pre-made audio loops, but Magix opened up the tool after moving it to a freemium monetization model and released a mobile edition called Music Maker Jam.  While this tool isn't any type of full-featured DAW (digital audio workstation), it is convenient in the sense that any loop and instrument packs that you own, free or purchased, are accessible both within the desktop and mobile versions of the software.

A few months after publishing this post, a member of the team at Design Wizard reached out and asked to be included in this list.  I'm normally very skeptical about such requests, but after pulling the Multinewmedia Podcast in the middle of last year, I thought, "Well... the least I can do is check it out."  Unsurprisingly, it was good.  Very surprisingly, however, was just how smooth and fluid the Design Wizard tool is.  It functions much like Canva or Desygner, but is buttery smooth throughout the entire process, even in places where even Canva struggles to keep up.

The workflows on Design Wizard are also super smooth.  Front and center when you're creating an asset is a search box that let's you look for exactly what you want.  A particular background, a holiday theme, or whatever else you can imagine.  This saves a lot of time over manually having to look through categories or going one-by-one.  Sure, other tools have useful searches like this now as well, but the smoothness (Have I mentioned Design Wizard is smooth?) was unbelievable and that really reduced the amount of time it took me to make an image compared to the other services reviewed.

Listen to more on our podcast

Now it's your turn!

How do you like the tools that were covered in this article?  Do they work for you?  Do you find that any of their competitors do a better job?  Let us know in the comment box below and let's start a conversation!